There is a lot going on in the once sleepy towns along the Monongahela River. Visitors and residents are discovering the myriad opportunities for outdoor recreation and heritage tourism. Boat launches and docks, biking and hiking trails are being built and historic sites restored. And Brownsville, one of those historic River Towns, is leading the pack.

Just 35 miles south of Pittsburgh, Brownsville — founded in 1814 — was once a major player in the nation’s steel industry. And much like Pittsburgh, as the steel and related industries waned, so did the town. Its population, close to 10,000 in 1940, is less than 2,500 today. As citizens moved away, many of Brownsville’s lovely buildings fell into disrepair and its historic downtown into ruin. 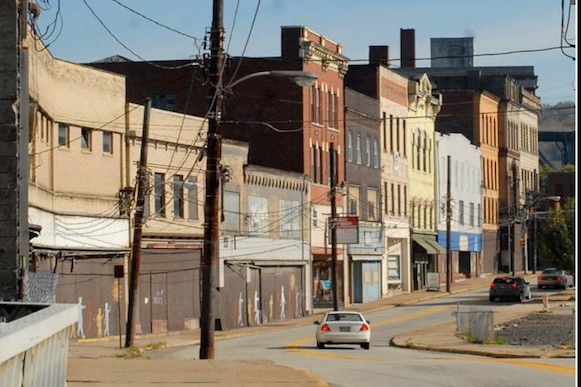 A number of local properties — Bowman’s Castle, Dunlap’s Creek Bridge, St. Peter’s Church and the Flatiron Building — are listed on the National Register of Historic Places. Brownsville was also one of the first meeting places for the participants in the incendiary Whiskey Rebellion. But this charming hamlet isn’t content to only have a remarkable past — it has a burning desire for an equally remarkable future.

And the fuel that lit that fire came from some of this old town’s youngest citizens.

In 2011, a group of six Brownsville High School students approached chemistry teacher Kelli Dellarose with concern about the low morale of their community. Dellarose helped the students form a “Students In Action” club, launching what she thought would amount to little more than a standard class civics project. Now, close to five years later, Brownsville’s “Students in Action,” a youth leadership program sponsored by the National Jefferson Awards of Public Service, is much more.

The original students and those who have since joined did so to help bring their town back from the brink. The challenge put to them — “How do you want to make yourcommunity better?” — turned the high school civics project into a community-wide, nationally recognized catalyst for the resurgence of Brownsville. 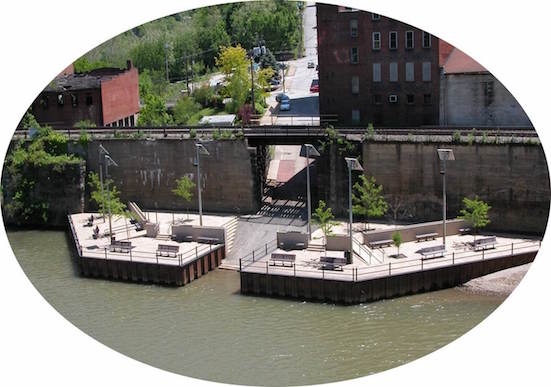 Andrew French, head of the Redevelopment Authority of Fayette County, worked with the students as a fiscal agent and attended many planning sessions as they formulated their ideas.

“The downtown area of Brownsville has been blighted for decades, essentially for these students’ whole lives,” explains French. “Yet they still felt real pride in their community and did not want to see their downtown remain a desolate place.”

The students settled on an ambitious project: build a downtown park with benches, walking trails and a stage for outdoor performances. The planned location is directly across from a 24-unit housing development with first floor retail to be constructed by TREK Development Group. Named for their school mascot, the students called their effort “Operation Falcon Revitalization” and crafted a mission statement — “Revitalize Brownsville by increasing morale and tourism, and by bridging the generation gap of our once flourishing community.”

For their plan to come to fruition, they needed money, and these students did more than just sell hoagies and hold bake sales. They partnered with local and county government; worked with McMillen Engineering and LaQuatra Bonci Associates, a landscape architectural firm from Pittsburgh, on the design of the stage; and created relationships with major philanthropic agents.

Brownsville Mayor Lester Ward credits the enthusiasm of the students for “putting Brownsville back on the map.”
And they weren’t the only ones working towards that goal.

“The student project coincided with the Redevelopment Authority’s acquisition of more than 20 downtown buildings through eminent domain,” explains French. 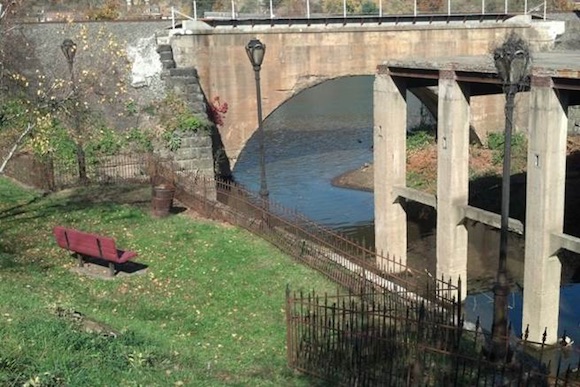 The park project fit with the plan to demolish some of those buildings to open up the town center and unveil Dunlap’s Creek Bridge, the first all cast iron bridge in the United States. The desire to revitalize Brownsville’s historic downtown got the attention of large funders in Pittsburgh — most notably The Heinz Endowments and UPMC Health Plan. Both contributed generously to the initial planning stages for TREK’s downtown housing project and the student park project.

The Redevelopment Authority of Fayette County received a $175,000 state grant for the students’ project. According to French, Brownsville Borough contributed $3,000; $20,000 came from the Laurel Highlands Visitors Bureau‘s Fayette County Tourism Grant. By approaching local businesses and holding fundraisers, the students raised an additional $23,000.

It all comes together at “The Neck”

A Brownsville resident herself, Muriel Nuttall, executive director of the Fayette Chamber of Commerce and vice-chair of Brownsville’s Planning Commission, has a real stake in the success of the current projects. She is most excited about how the student work dovetails with other projects in development.

Major funders from outside Brownsville saw the combination of housing, retail and outdoor space as exactly what the town needed to sustain itself with new tax revenue. Nuttall agrees.

“Additionally, the involvement of the students helps bolster the needed community support, which is very much in favor of the current projects,” adds Nuttall. “The community is very excited.”

Redevelopment does not come without tough choices. There was debate around preserving historic but dilapidated buildings or demolishing them and starting from scratch. For the area where the National Road passes through town as Market Street — known as “The Neck” — the Planning Commission worked with outside consultants to reach a hybrid decision: save what could be restored and remove less architecturally viable buildings.

Though TREK will construct one structure to fill the space on Market Street formerly occupied by a long shuttered G.C. Murphy, the façade will appear as three tall, narrow buildings, mirroring the look of its historical neighbors. Across the street will be the students’ park, providing a gathering place for the new residents, shoppers and visitors.

“Seeing how committed the students are, how they have kept at it, demonstrates to us, as a private investor in the community, that, if the students care that much, there is a future here,” says Trey Barbour, senior project manager at TREK Development Group. “The students are inspiring; they make us want to be better, to do better, to be more motivated ourselves. They have motivated the whole town.”

Joe Hackett, principal of LaQuatra Bonci, agrees. The landscape architectural firm was brought in by the Heinz Endowment to work with the students on the design of the park stage. The new design incorporates salvaged trusses from a nearby train station slated for demolition.

“The design is now more iconic,” enthuses Hackett. “Part of Brownsville’s past is being repurposed for Brownsville’s future. The students had the dream. We just helped them dream bigger.”

In the summer of 2013, Hackett was there when the students presented their vision to a group of philanthropic foundations, including Heinz.

“It’s hard to get one foundation in a room, let alone five or six,” he says. “These kids raised the excitement level. Everyone wanted to contribute. It was really incredible.”

And that has been noticed way beyond the town’s borders. This year, the Brownsville Students in Action team earned the Jefferson Awards Foundation ranking as the top ambassador team in the nation out of 325 schools in contention. Their Jefferson Award video shows why these incredible students were so successful.

Other revitalization and preservation projects in Brownsville are in the planning stages or already approved for funding and implementation. PennDOT has committed to the renovation of Dunlap’s Creek Bridge. A capital campaign is underway to renovate and expand Brownsville’s library, and resources are being sought to restore Central Park and to design a walking trail bordering Dunlap Creek. Outside consultants and agencies — The River Town Program and The National Road Heritage Corridor (NRHC) — are also working within the community to continue the progress. 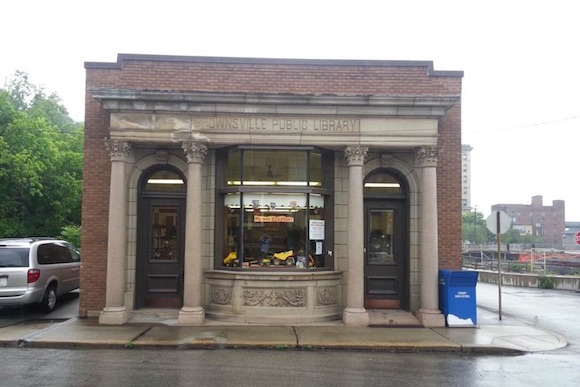 “We are pleased to have played a role in bringing TREK to town,” enthuses Donna Holdorff of the NRHC; the organization has been engaged in Brownsville since its formation in 1994. “The students’ vision, along with other investments being made here, truly are bringing Brownsville into a new era. Hopefully, this is only the beginning of great things to come!”

As in Pittsburgh, there is talk of a renaissance afoot. Residents, including its youngest, believe in their community, take pride in their town, and want to make sure there is a reason to stay there.

“These kids truly are Students in Action,” says French, “They rolled up their sleeves and made something happen.”

WENDY DUCHENE is an attorney with offices in Allegheny and Somerset Counties. She is also an avid user of the many hiking and biking trails in western PA, where she can often be found on her recumbent bike or walking her dog Sander.

This story was created in partnership with the Keystone Edge.