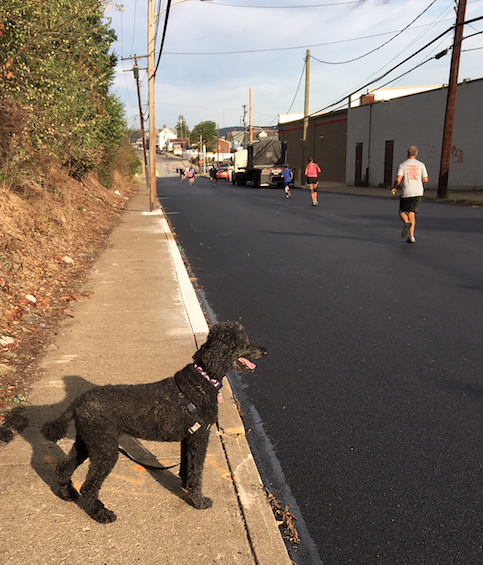 Last Saturday, the 10th, was the official celebration day for the City of Monongahela’s 250 yr anniversary. It promised to be a exciting day with something going on from early morning to night. I don’t live in Monongahela & never have but, somehow, I’ve been volunteering with the folks of the Monongahela Area Revitalization Corporation for several years. But, this wasn’t my anniversary, so I hadn’t planned to take part in it, until a phone call the evening before. MARC had organized a 5K run for the early morning and were a little short on route monitors. Could I help out? Of course.
So, at 7:45AM Saturday, Frodo, the family dog, & I were at the Aquatorium confirming our assignment. I’d received it the night before but when I arrived there it didn’t sound so clear anymore. It felt like we were guarding the parking lot of CFS Bank. But, yes, our job was to make sure that no traffic from Main St cut through the parking lots of the bank & the Dollar Store onto the route on Chess St, just N of 12th Street. OK.
So we took our station. It still felt like we were guarding the bank’s parking lot but Frodo was OK with standing guard while we watched the outbound runners heading down Chess St.
It was an interesting vantage point because I had only a short line of sight to the outbound runners. When the lead pack of runners pounded down the hill on 12th St & made a left turn onto Chess there was a loose pack of mostly young, lanky, males at the head. But, by the time they’d disappeared down the length of Chess to the turnaround point and passed in front of us heading inbound they were down to two, well out in front. They were running stride for stride & neither appeared to be working very hard. Jeez, even 50 yrs ago, I wasn’t in that good a shape. Would’ve been interesting to be at the finish to see which had more gas in the tank or if one had been saving a bunch for a final sprint.
It was a good turnout, with 72 runners & 29 walkers registered. Best times were 18:28:54 Running, and 39:53:42 Walking. 17 Sponsors & a whole bunch of volunteers from the community made it all possible. Good work folks and thank you.
One of the walkers that passed by was Washington County Commissioner Harlan Shober. We’ve worked together in the past, so chatted a bit as he went by. Like Woody Allen said, 95% of life is just showing up. Thank you, Harlan. Monongahela Councilperson Ken Kulak also walked by. But, he lives, I believe, on Chess St & was making an early morning run(walk) to the grocery store before things got hectic. Finally, Rusty Polonoli, another Councilperson, rode by in a Monongahela Fire Department vehicle marking the end of the runners/walkers line. At that point, Frodo & I were done. Normally, we’d have gone down to the Aquatorium & hung around, schmoozed until the race was over & all the medals were awarded. But the parade was starting from Chess Park at 10AM & the Aquatorium was already very busy with activity at 7:45AM, so I just gave Frodo a drink of water & we headed home.