Over the last 2-3 weeks I’ve seen more Osprey presence & fishing activity than any year since they first showed up 4 years ago. And not only has a pair been seen more often in early April, but a photographer/birder reported seeing three on the lake at the same time. From what I’ve read, Osprey will certainly defend their nest & immediate nest area, but are not so territorial that they won’t share the water. The Bald Eagles at Canonsburg Lake, on the other hand, have been observed, this spring, driving an Eaglet as well as Osprey off the lake.

And over the last weeks I’ve observed 5 osprey “dives”, attempting to catch fish. Two were successful, although I’ve read that Osprey are generally successful on about 70% of their fish hunts.

Many of us have probably seen the near iconic photos/videos of a Bald Eagle, like this one, snatching a fish at or near the surface, barely getting it’s claws wet.

That’s not the way Osprey do it. In every “dive” I’ve seen, the Osprey ends up at least partially submerged. And the one we saw 3 weeks back was a show stopper. The bird was sitting on a tree limb overlooking the water, when it suddenly leaned forward & took off. At first we thought it was heading down lake, but then it circled around & back 2-3 times. Finally it turned itself into the very stiff wind & just hung there in the air for several seconds, not much more than 50′ away & 50′ up. Then it just folded it’s wings & dropped, claws first, into the water & disappeared completely below the surface. There was kind of a collective, ‘wow, stuck that landing buddy’. And then it reappeared, in reverse, head first, hauling itself out of the water holding onto a 10-12″ fish.

When I relayed this to a ‘conservationist’ friend he remarked that he wouldn’t know how to recognize an Osprey vs other local raptors. After a moments thought I replied that there were at least two distinctive features that would identify an Osprey. Thought I’d share that.

Overall, they are whiter below than most raptors.

Second, an Osprey, with a 5′-6′ wingspan, is larger than the common Red Tailed Hawk ( wingspan 4’+/- a  few inches ) but smaller than a Bald Eagle with a wingspan close to 7′. But, honestly, without a reference object, and at an undetermined distance away, I couldn’t tell the difference by wingspan alone. But the overall  shape & color is very distinctive.

Besides showing a great deal of white below, the Osprey’s wings, in flight, are held with a very distinctive leading wedge shape. And they’ll often show a more pronounced taper to the edges :

It’s been described as “M” shaped when seen from below although I’d call it a more flattened “M”.

Whereas, the Red Tailed Hawk shows a straight leading edge in flight : 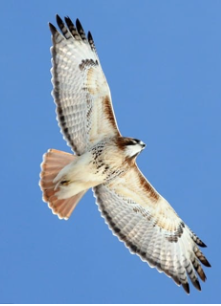 And the Bald Eagle’s wings (never mind the dark colors) , in flight, look like a couple of broad, flat boards (2 by 12’s) with the corners rounded off : 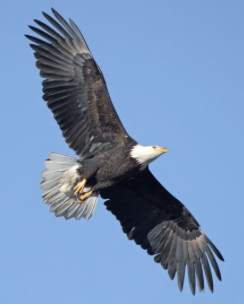 So that the overall effect is that of a much larger bird than the Osprey.

And often, the wing silhouette will be the most definitive especially when you see the birds at distance or unfavorable light or sun angle conditions.

Hope this helps you to recognize  the beauty that’s out there, in nature, if we just look for it.