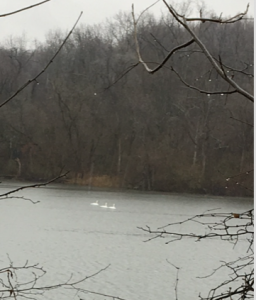 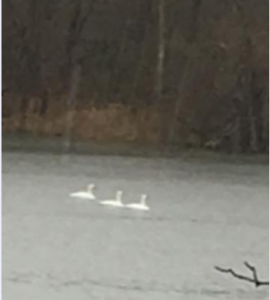 Walking along Peters Lake yesterday, 10/16, & spotted an Osprey doing a slow pass along the shoreline before it veered off. I’m thinking that it’s getting around the time when they’ll start moving toward a wintering ground. A very stable metric such as daylight/nighttime hours must be one trigger. Food availability has to play in there also since I’ve read that they don’t make a ‘continuous ‘ migration flight but a series of jumps & layovers on the way to a final wintering ground.

Also wondered when Cormorant move out since I hadn’t seen them for a few days. But then met a walker who described the ‘unusual’ birds she saw yesterday. ” Black, like crows, but with ‘funny’ necks & beaks “. Turns out she was describing 4 Cormorant perched in same tree I usually spot a pair. So we have a little flock of Cormorant. In nice weather they seem to prefer a perch at the top of the biggest, deadest tree overlooking the water and spend more time out of the water than in it. And, in the water, they ride so low that it reminded me of a submarine running with periscope up & deck barely breaking the surface of the water.

More Egrets. Met another couple & the fellow remarked ‘ I think I saw what might have seen 3 Snowy Egret yesterday ‘. I’d also seen some white ‘birds’ in shallows at far end of the lake yesterday but way to far for me to make an ID. I replied that my ‘ birder friends ‘ had advised that we don’t see Snowy’s around here but more likely Great White Egrets. I described the Snowy as a medium sized bird only a couple of feet tall while the Great White is closer to the size of a Great Blue Heron. Nope, he said, weren’t nowhere near that big. So there we are. Trouble is, the Audubon Field Guide on-line for Snowy Egret quotes ” After breeding season may wander well north “.  Their range map shows “Common” breeding area in E PA & coastal areas as far N as Connecticut and ‘Uncommon” breeding area on W end (Ohio Shore) of Lake Erie to a dotted line that approximates the US/Canada border. So, it’s certainly possible. Wonder if there have been other reported sightings of Snowy’s? Either that, or we have some ” Not-So-Great White Egrets ” out there.

Hope the Fall stays brighter for a while. Really tired of rain. Have fun out there.

Note from Mon River Towns Program:  We would like to include images of the birds referred to in this blog.  So please, feel free to share your photos with us!!

Today, 4/3, was the best bird (Osprey) watching day I’ve ever had. After seeing a pair at Peters Lake on Sunday and a loner on Monday, I figured that a smart bird was going to be hunkered down in the conifers around the lake. Staying out of the rain. (Yeah, we were out walking it it.) I guess I forgot that if your lifestyle requires diving into the water to eat, being wet is just part of the deal.

We were rounding the bend at the upper (shallower) end of the lake when one barreled in front of us, from right to left, heading down lake. Over  the next few minutes that bird made one dive after another into the water. The most spectacular came after it had spiraled up over treetop height, wheeled around & dropped straight down the elevator shaft into the water. Whoa ! Either that bird was very hungry or he had a nesting mate that was. If it continues to be spending a lot of time fishing then I’m guessing the latter. I couldn’t tell, from across the lake, if it’d been successful. Sooner or later, though, practice will pay.

Next thing, this Great Blue Heron just about flew into my pocket. It came across a small inlet & landed less than 20′ feet away. It seemed to be so focused, staring in the direction of the Osprey, that it never even glanced  at the dog & I very close by. Guessing, again, that an active potential predator or competitor ( for the fish ) just naturally demands it’s full attention.

Have fun out there.